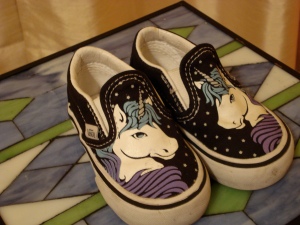 A local radio station is asking listeners to vote on the best songs of the decade.  They must have skipped a few years on the calendar because I know I was just a junior in college watching the millennium dawn across Galway’s Corrib River.  My best friend only just said to me, “Hey, look, the Earth doesn’t care that we think we just turned 2000.”

Have ten years really passed?  Am I really a mother and a wife who has already written the story of her twenties?  I think I must be.  This morning, when it seemed like Moira recognized herself in the mirror for the first time, her dimples were on full display as she giggled and cooed.  The way the sun fell upon us made me notice for the first time that my own dimples were carving grooves in my cheeks.  Things change when you look away from your own reflection for a while.  At least those lines mean I am an experienced smiler!

These thoughts coincide well with a conversation I had with my Dad yesterday.  For as long as I can remember, he has been counting on his fingers: “Where do you want to be in one year, three years, five years?”  This time we were talking about visionaries, those who determine where corporations and culture will be in fifteen, twenty-five, fifty years.  He was taking my dream of staying home to raise Moira completely seriously and is ready to engage with me as I work on the broad dreams and the devilish details that will get me there. Not only did he want me to focus on how to envision what life will be like through the time that MJ’s gets on the bus for kindergarten, he also was inviting me to peer into a more universal future and decide how I wanted to position myself within it.

In many ways, imaging what the world will look like and what I would like my place in it to be when I am eighty years old seems completely ridiculous since I cannot even picture what it will be like to go back to work next week.  But still, it is a valid and important perspective to be willing to adopt.  Plus, it stops you from looking back one year, five years, ten years and getting caught up in the trap of regret.  (I fight every day not to fall into self recrimination for not having figured out all this stuff before I had a daughter who deserves all the attention and passion she needs.)

As much as I am on fire to pour all available energy into this new non-9 to 5 adventure (more details in time, promise!) because it is fresh and exciting and because it is all meant to be in Moira’s best interests, I am keenly aware of the balancing act it will require.  She sleeps in her swing while I fill a legal pad with ideas.  She coos in her Sleepy Wrap as I type this.  Nothing has my full attention right now, but is it possible to be focused on one thing right now?  Even if I were not trying to construct a DIY livelihood right now I would succumb to multitasking’s siren song. I’d read a novel while I nursed and I’d still be on Facebook while we watched a DVD.

But honestly, how many Zen masters have been 21st century mamas looking to contribute to the household coffers?  Call me when you meet one.  I know that there is huge opposition between the modern imperative to do four things at once and the pursuit of  focused mindfulness.  I have tried to dream myself into the latter camp, but it seems I will have to take the lessons that meditation have taught me and bring them over the world of women who successfully juggle it all.

I have to believe that I can be the mythical supermommy who can be present for her kids, bring in much needed income, and maintain her own sense of self worth.  They are as rare as unicorns, and just as beautiful.

Thing is, I do believe in unicorns, and with all of my energy and consciousness I will raise a daughter who believes in them too.