The internet is, quite simply, the new town square. Nothing more and nothing less, and in that square, there are utter idiots yelling at the tops of their lungs about crap, but there are small tables surrounded by people having true, powerful discourse. There are people handing out pamphlets. People on soap boxes. And then there are people strolling through, feeling a bit more alive, a bit more connected just by observing.

BlissChick has unwittingly become my muse of late. The above is her comment on yesterday’s post about self promotion, the strange necessity that we creative types have to come to grips with if we want to be heard about the chattering crowd.

She paints such a brilliant picture – I can see myself in this square. I want to be one of those people sitting at one of those tables, engaged in the sorts of conversations that change lives. The talk would be so brilliant that my companions and I can tune out the blowhards and the fear mongers and the endless trails of paparazzi fueled gossip.

At the same time, I remember thinking that this is a great metaphor, but I’ve never been a part of a town square like that, at least not in this country. In Europe I think I have been one of those passersby, enlivened by watching the locals acting out their lives in one of those bustling public spaces. Here in the States, however, those town squares, if they exist at all, may fill up for the Fourth of July parade, but otherwise remain a little forlorn, no longer the heart of the community.

It seems like the Internet came in to fill a serious void that we may all have been experiencing for quite a while. How long has it been since we lived in lively villages where expression and relationship ruled the day? 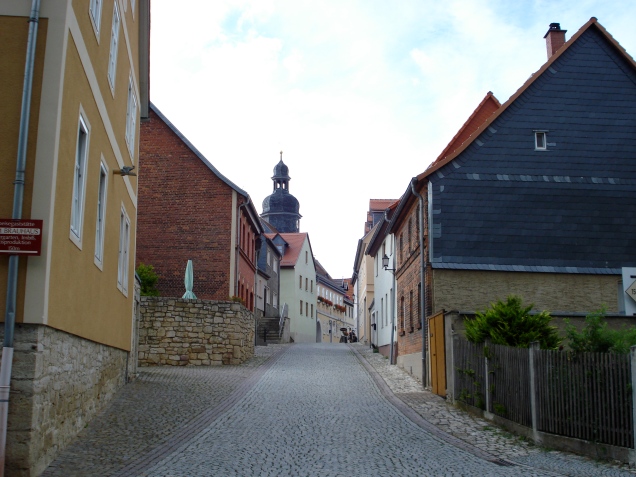 Part of me wonders if those places every really existed, until I recall our friends’ more than idyllic village, Dornburg in eastern Germany. There, it might have become a wee bit claustrophobic, but it was incredible to walk the narrow lanes and know that everyone knew everyone else’s name.

Somehow I think I had myself convinced that blogging and all this virtual communication was somehow suspect, that this new means of communication had somehow stamped out a more vivid personal set of interactions. I worried that it was a pale facsimile of something better and more pure that once existed before. In fact, the ways that people communicate has always been in flux and rather than being the destructive force, the Internet gives us new ways to talk to each other that never would have been possible in the confines of a tiny town square. (I never read this book, but the title comes to mind when I start dipping into the topic of isolation and disconnection in American society.)

I know that none of these are new revelations, but one of the main functions of this this blog is help me really understand what might have seemed so obvious but which needed closer examination so that I could truly know. After months of writing in this space it is probably strange that I am only coming to peace with this practice now, but I suppose everything has to blossom and take root in its own time.

What can we do to make the conversations that we have on these far-flung flickering screens come to life in our offline worlds? How can we breath life into all of the community spaces we inhabit?