The cross, with which the ashes are traced upon us, is the sign of Christ’s victory over death. The words “Remember that thou art dust and that to dust thou shall return” are not to be taken as the quasi-form of a kind of “sacrament of death” (as if such a thing were possible). It might be good stoicism to receive a mere reminder of our condemnation to die, but it is not Christianity. 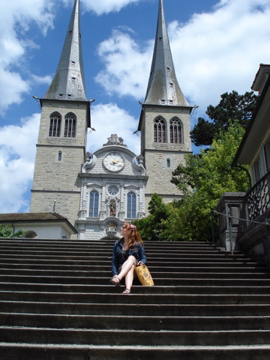 I attended an ecumenical Ash Wednesday service this evening. The program they passed out gave us Merton’s introductory passage to glimpse what Christianity was not. As I stood in a chapel I had last entered when I attended a Rufus Wainright concert (not exactly a journey into the sacred as Matthew, Mark, Luke, and John might have it), I came to realize how much I have to learn about what Christianity is.

Sure, I’ve got the basics down and I understand what it was to be raised a Catholic kid in the 80s. But for all my reading, it was not until I watched a sparsely attended ritual held together with a crazy quilt of readings and quotations that I was able to look through the windows of Christianity in a new way and realize, despite its many doors, it is still just one large house.

Though I now have a smudge of ash upon my forehead, I did not remember the significance of this temporary mark when I decided to step in after work. I am sure that I knew once, but it was not the sort of information I ever had to retain. All I knew was that it made sense that I was in that chapel. I needed a place for quiet contemplation to mark the day and the remnants of my own history and the power of ancestral memory set me comfortably enough in the Christian fold.

Perhaps it was because I am not a student, but for all that I had the credentials of a Christian, I still felt like I stood outside and looked in the windows of their ritual.

This is not to say that I felt alienated. In fact, I felt the complete opposite.

I was amazed to realize that the sentiments included in the Litany of Penance so closely echoed untutored words I have whispered into my own soul. The language, that I know a younger, more recalcitrant version of myself would have found debasing, felt necessarily humble and honest. The professed admissions of failings and the hunger for reconciliation at first seemed too heavy a cross to bear, but then I realized that I force myself through such rigorous self examination all the time. And I am much less forgiving of my own sins than God promises to be…

Yes, it all made sense, and the prayers rang true.  Enough of me was at home there.

But still, a portion of me observed from outside this house of Christ. That part of me stood rooted into the earth and felt the rain fall upon my face and trusted the sun would come out to dry me in time. I was able to love everything marks this first day of Lent because I know I am welcome in that building, but am comforted to know I can still step away in order to speak the language of a Yoga Sutra or an Arabic mantra.

Other faiths’ houses of worship do not offer the organic comfort that the Catholicism of my heritage does, but their traditions still offer sweet succor for the soul. Sitting in the warm embrace of Christ I was able to understand that every moment is sweeter when I can embrace all spiritual possibilities. Churches, mosques, and temples – they are a collection of neighbors’ homes planted in a circle on God’s beautiful green earth.